From Heraldry of the World
Your site history : Wilkinson Sword
Jump to navigation Jump to search 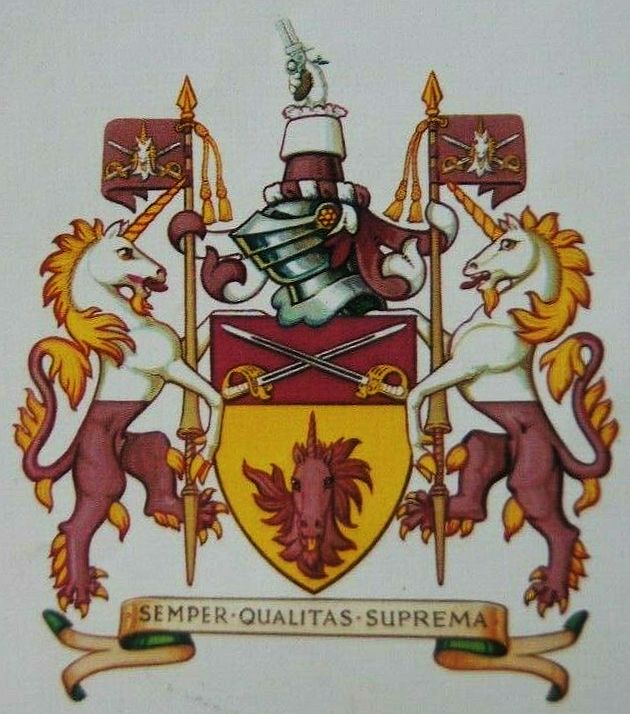 The arms were officially granted in January 1972.

Research by the College of Arms has shown that where arms have been granted to families by the name of Wilkinson, unicorns have featured among the principal charges. For the purposes of Wilkinson Sword Limited it was felt that the unicorn was particularly suitable in view of the sword-like horn which customarily adorns the head of this mythical creature.

In order to emphasise this only the head is featured on the shield. It is shown affronty thus enabling the horn to be shown in a vertical position thereby achieving a suitable visual balance with the two crossed swords in the chief or upper part of the shield . The crossed swords themselves are of course the well-known symbol of the company.

The gold background to the major part of the shield symbolises the value of the Company's service to the country.

The tincture murrey (maroon) has been used as, with silver, it has long formed part of the Company's house colours, which is also why these two colours have been used in the mantling and wreath.

The hand holding a Henry Nock pistol in the crest is an allusion to the Company's original founder and activities. The Company colours of Argent and Murrey are again used.

The supporters are a unicorn and a lion. The significance of these two creatures in UK heraldry is of course an important one because as such they form the supporters of the Royal Achievement. That they are also supporting lances is emblematic of the Company's distinguished history in the fashioning of weapons for the defence of the realm.