From Heraldry of the World
Your site history : Winchester
Jump to navigation Jump to search 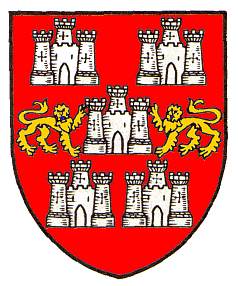 Gules five Castles triple towered in saltire Argent masoned proper the Portcullis of each part-raised Or and on either side of the castle in fess point a Lion passant guardant that to the dexter contourné Gold.

The Arms were first recorded by the Heralds during their visitations between 1622 and 1686. The earliest example is in a late 15th-century window in the Westgate.

The castles and Royal Lions "passant guardant", or "Lions of England" suggest a derivation from the Common Seal of 1253, consisting only of a single triple-towered castle, and the Statute Merchant Seal of 1283, comprising the bust of Edward I between two castles and a single Royal Lion. Winchester, the ancient capital of England, continues therefore to use its Arms in the original form and has never sought to add a crest, a motto or supporters, which emblems were not in use for towns at the time when Winchester's Arms originated.