From Heraldry of the World
Your site history : Winseler
Jump to navigation Jump to search 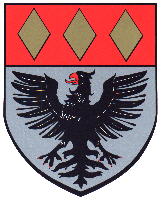 The main part of the territory historically belonged to the Estate of Wiltz. The arms of Wiltz are in gold a chief of red. The chief is thus taken from these arms. The eagle is the symbol of St. John, patron saint of the church in Berlé, and at the same time derived from the arms of the Grumelscheid family, who played a major role in the local history. The diamonds are derived from the arms of another important family, the Doncol family.