From Heraldry of the World
Your site history : Woodstock
Jump to navigation Jump to search 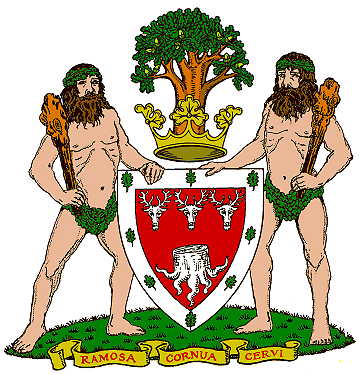 Arms : Gules the Stump of a Tree couped and eradicated Argent and in chief three Stags' Heads caboshed of the same all within a Bordure of the last charged with eight Oak Leaves Vert.
Crest : Out of a Ducal Coronet Or an Oak Tree proper leaved Vert.
Supporters : On either side a Savage proper wreathed about the head and loins with Oak Leaves Vert holding over his exterior shoulder a Club proper.
Motto 'RAMOSA CORNUA CERVI' - The branching horns of the stag.

Recorded at the Visitation of 1634. Certified painting obtained in 1949, for the Woodstock Borough Council.

The tree-stock was adopted by Edward III, as an obvious rebus, as one of his badges in allusion to the royal manor of Woodstock. The name of the town means "a place in the woods" and with the royal forest of Wychwood stretching from the town west and north towards the Cotswolds, the hunting lodge on the doorstep, and the "Great Park of Woodstock" it fitting that the town adopted the other emblems.

The motto is from Virgil, Eclogues, vii, c. 305; the reference is to the horns of a stag given as an offering to Diana, the Roman goddess of the hunt.