From Heraldry of the World
Your site history : Worshipful Company of Butchers
Jump to navigation Jump to search 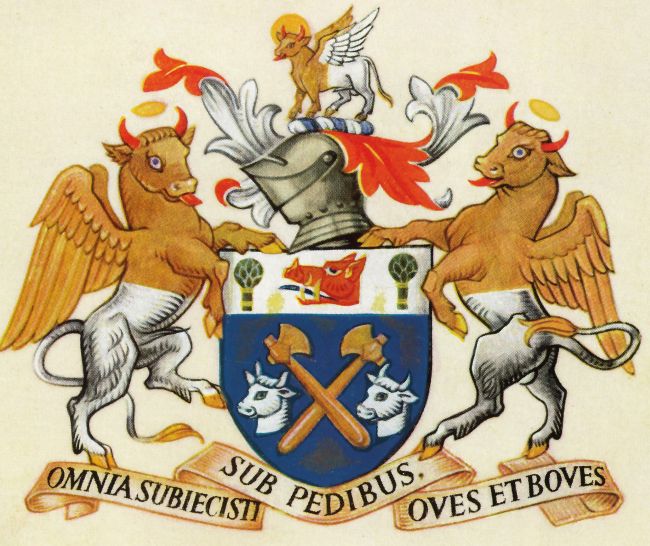 Arms : Azure, two poleaxes in saltire Or, blades inwards, between two bulls' heads couped in fesse argent; on a chief of the last a boar's head couped gules, tusked of the second, langued of the first, between two bunches of knee-holly vert banded gold.
Crest: On a wreath of the colours, A bull statant, wings addorsed, Or, the wings lined argent, the head, forequarters, hoofs and tuft of the tail of the first, the hindquarters of the second, armed gules, about the head a nimbus gold.
Supporters: On either side a bull with wings addorsed, the head, forequarters, wings, hoofs and tuft of the tail Or, the hindquarters argent, armed gules, about the head a nimbus of the first.
Motto: Omnia subiecisti sub pedibus, oves et boves.

If this text appears, it means that I have not yet had the time to add the information on these arms. Just Company of Butchers mail me and I will add all information that I have !