From Heraldry of the World
Your site history : Worshipful Company of Educators
Jump to navigation Jump to search 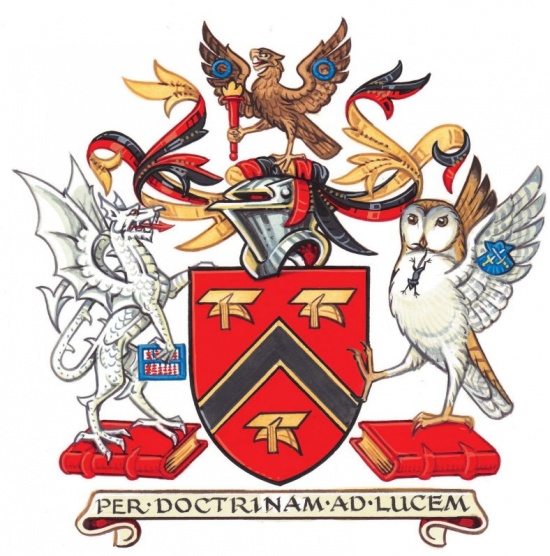 The arms were officially granted on February 7, 2014.

The shield has a red background divided by a black chevron edged with gold and with three mortar boards in gold lying within it. The symbolism is self-evident.

The family of Raoul Franklin’s late wife (Ivens) was granted arms in 1816 that incorporate an eagle in the crest. To acknowledge Raoul’s contribution to the Educators this eagle is included in our crest. It stands for wisdom and understanding with the claw holding a torch for learning. The Ivens eagle has a blue amulet on the underside of each wing. These are included to represent good fortune and protection from harm.

The supporter on the left is a dragon representing the City of London. In one claw it holds an abacus to acknowledge Sir John Stuttard’s contribution. Sir John has an abacus in his shield as he is an accountant; the abacus also represents calculation and mathematics in education.

The other supporter is a barn owl—for wisdom. On the underside of the wing is a representation of swords on a scallop—elements that feature in the arms of Sir Paul Judge. Scallops are a symbol of pilgrimage—in our case through life and learning. Both supporters stand on red books, again to represent learning. In the owl’s beak a mouse hangs by its tail. This is a pun on the modern way of learning via computer and mouse.

Literature : Image and info from http://www.co-educators.com/