From Heraldry of the World
Your site history : Worshipful Company of Fanmakers
Jump to navigation Jump to search 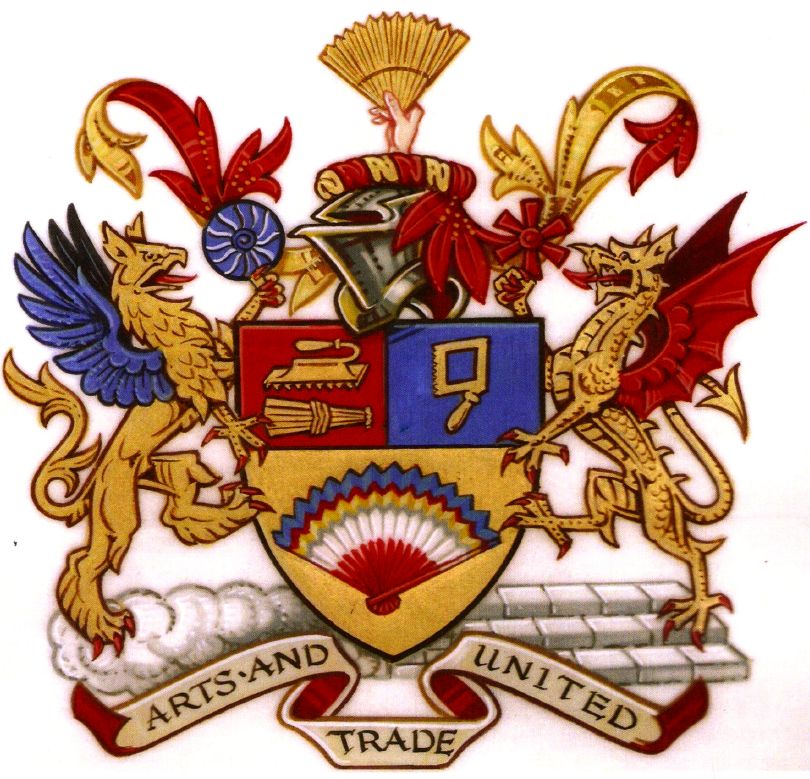 Arms : Or, a fan displayed with a mount of various• devices and colours, the sticks gules; on a chief per pale gules and azure, on the dexter side a shaving iron over a bundle of sticks tied together of the first, on the sinister a framed saw in pale gold.
Crest: On a wreath Or and gules, A hand couped proper holding a fan displayed Or.
Supporters : On the dexter upon a Cloud proper a Griffin Or winged Azure holding in the sinister foreclaw a multi¬vaned Aircraft Jet Fan also Azure and on the sinister upon the centre of three Limestone Steps proper a Dragon Or winged Gules holding in the dexter forefoot a six-bladed Mechanical Fan also Gules.
Motto: Arts and trade united.

If this text appears, it means that I have not yet had the time to add the information on these arms. Just Company of Fanmakers mail me and I will add all information that I have !

The griffin standing on clouds and holding an aircraft jet fan reflects the use of high performance fans in aviation engines. The Rolls Royce Griffon engine was used in many historic aircraft including the Spitfire and Shackleton. The City of London dragon standing on the steps of a building represents the use of fans in the heating, ventilation and air conditioning provided by building service engineers. The six bladed fan symbolises the many other uses of fans in the modern world from cooling computers to drying wet hands. The wings of the supporters, themselves also instruments of air movement, reflect by their colours the cooling and heating effects that mechanical fans achieve.

Literature : Bromley and Child, 1960; information from the Worshipful Company of Fan Makers