From Heraldry of the World
Your site history : Worshipful Company of Glass Sellers
Jump to navigation Jump to search 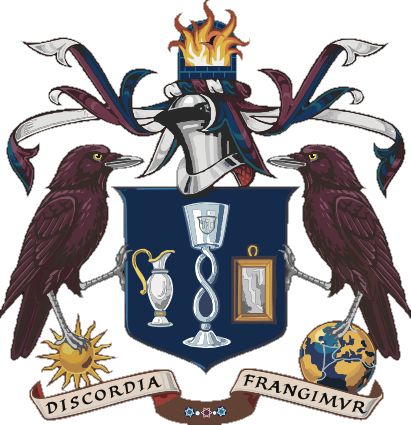 The arms were officially granted in 2013.

The main shield has been in use by the company since at least 1680 when it appears on the seal of the company. At the same time the arms appear on documents and the colours are known since 1681.

The arms show a earthenware ewer, a Venetian glass and a mirrorglass as symbols of the trade. The company did not only trade in glass, but also in 'whiteware' or ceramics.

The raven supporters represent the Company’s unique and historic connection with George Ravenscroft, who developed Lead Crystal glass which continues today for decorative and scientific purposes. It is said that the Company, uniquely, purchased Ravenscroft’s first year’s output to ensure a sound business footing of his Company.

The ravens also represent ‘flight’ as glass products are increasingly used in the manufacture and control of aircraft. They stand on a sun and a globe.

The sun stands for enlightenment and represents the ongoing connection of the company with research in the glas sindustry and education through a Glass in Society project that has been adopted in the National Curriculum, and through individual bursaries.

The globe represents the global markets for all glass products as well as global communication, facilitated by optical glass fibre subsea cables. The actual lay of the main cable routes, as they are today, are also shown on the globe. The oceans link to boats made with fibreglass hulls and to one of HM Submarines adopted, over many years, by the Company. Glass objects, found in sunken ships, have helped track trade routes and improve our knowledge of the history of glass making.

The crest shows a glass furnace representing the heat essential to making glass for any application. Flames also appear on the Crest of Sir Robert Mansell, the industrialist who, in 1623, was granted a patent for making any type of glass object.

The motto “Discordia Frangimvr” (which may be translated as “we will be broken by discord”) appears already in the 17th century. At its centre are glass beads, on fibreglass thread, representing glass artistry since earliest times and across the globe – for trading, for adornment, to show status, riches or faith.