From Heraldry of the World
Your site history : Worshipful Company of Grocers
Jump to navigation Jump to search 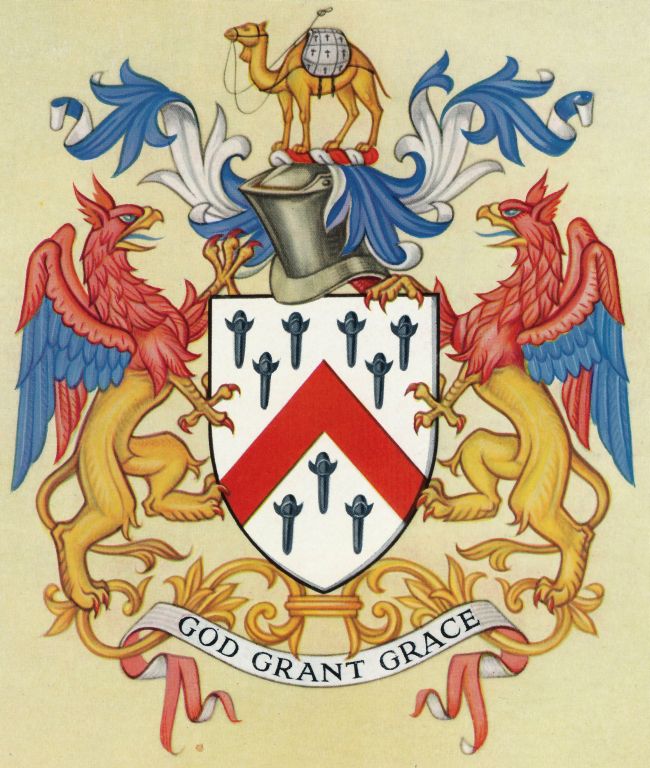 Arms : Argent, a chev­ron gules between nine cloves sable.
Crest: On a wreath of the colours, A camel statant Or, bridled sable, on his back two bags of pepper argent powdered with cloves and corded sable. Mantled azure, doubled argent.
Supporters: On either side a griffin per fesse gules and Or, the underwing azure, beaked and clawed Or.
Motto: God grant grace.

The arms were officially granted in 1532, crest granted (the mantling gules, doubled argent) on 14 October 1562; mantling changed at the Visitation of 1634. The whole exemplified 8 June 1927.

The Worshipful Company of Grocers, standing second in order of precedence among the Twelve Great Companies of the City of London, was founded in 1345 as a"misterie" by 22 pepperers of Soper's Lane. The Pepperers themselves already constituted an ancient gild, first heard of in the reign of King Henry II, which had provided 10 Lord Mayors up to that time, but this then seems to have been incorporated with the new misterie. The change was probably made because of business interests expanding into wider fields, as a list of 1453 enumerates some 40 spices and other products, as well as pepper, dealt with en gros by the Grocers at that time.

A Charter was obtained in 1428, but the arms, although of respectable antiquity were not granted until long after the original foundation, in 1532.

The Grocers' arms seem to represent the first use of the clove as a charge in heraldry. Cloves of course were among the spices dealt in by grocers, and so they may look appropriate enough, though one still wonders why peppercorns weren't chosen, from which the Grocers' forerunners had taken their name. Pepper, associated with Grocers' for nearly 800 years, and bags of pepper still carried by their camel in the 17th century, was entirely dropped from the official 20th century version of the blazon, which describes cloves instead of peppercorns on the bags in the crest.

However, Goodhart, in 1971, argued that the cloves may not have been the original charge. When the arms were officially granted in 1532 it definitely was the spice that was meant. But the arms may have been in use at least over a century before. In the 14th century however, the word clove did not mean the spice (clou de girofle at the time), but was used as a word for the type of weights used by merchants at the time (for the auncel balance or auncel scale). It would also have been a more logical charge for a guild that traded mainly in pepper and not in cloves. In the 14th century the weights would be a very appropriate choice. Unfortunately there are no images of the arms before the 16th century, only descriptions. Due to changes in the system of weighing goods, the old word clou for weights may have become obscure and when the College of Arms was asked for the grant, the word had started to indicate the clove. Cloves, in the 16th cenury had become a common spice and were thus appropriate for the Grocers'.

There is also some evidence that there have been 10 cloves in the arms originally used by the Company. This may have been reduced to 9 at the time of the grant, for the sake of symmetry and because 3 and 9 seem to have been numbers favoured by Kings of Arms.

The true derivation of the Grocers' cloves is now unlikely ever to be unequivocally established, but if the original connection was with the cloues of the auncel balance, rather than with the spice, that would at least explain the puzzling choice of cloves in preference to peppercorns. Pepper is and always has been a more important spice than cloves, and it always was the particular concern of the gild of Pepperers and of the Grocers' Company as their successors.