From Heraldry of the World
Your site history : Worshipful Company of Parish Clerks
Jump to navigation Jump to search 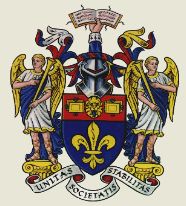 Arms : Azure a Fleur de lys or, on a chief gules a leopard's head Or between two 'pricksong books' of the same laced vert.
Supporters : On either side and standing to the front on the capital of an Ionic Column Or and Angel gazing outwards proper winged Or vested of a tunic Argent garnished Or draped over the interior shoulder with a mantle Azure and holding with the interior hand a Trumpet baldrick-wise the bell upwards all gold.
Crest : On a wreath gules and Azure, a cubit arm vested Azure cuffed ermine holding an open 'pricksong' book all proper.
Motto: "Unitas societatis stabilitas" 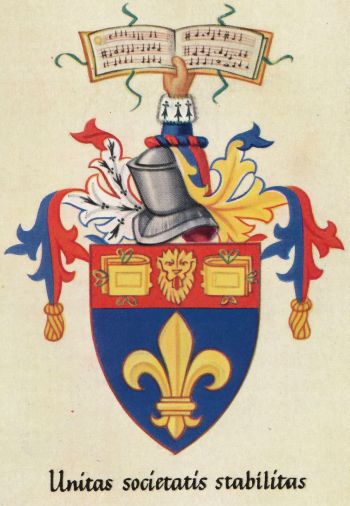 If this text appears, it means that I have not yet had the time to add the information on these arms. Just Company of Parish Clerks mail me and I will add all information that I have !