From Heraldry of the World
Your site history : Worshipful Company of Plumbers
Jump to navigation Jump to search 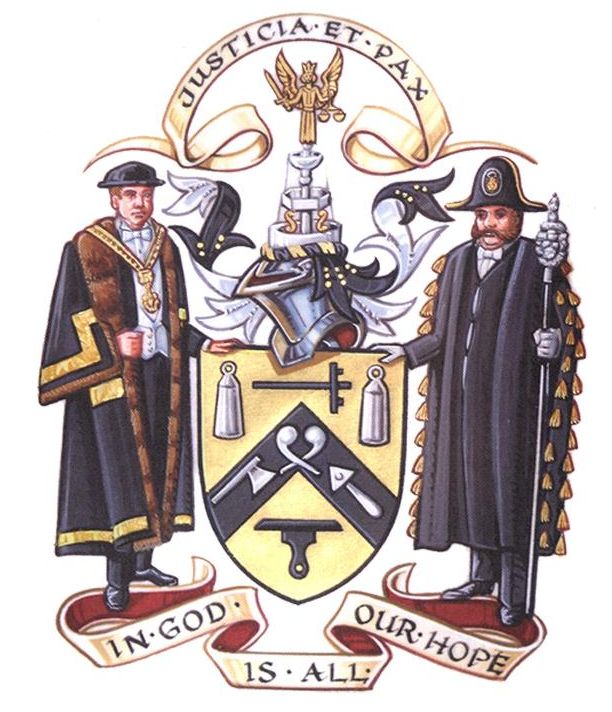 Arms : Or, on a chevron sable between in chief a Jacob's staff of the second between two sounding leads proper, and in base a water level also sable, two soldering irons in saltire between on the dexter a cutting knife and on the sinister a shavehook argent.
Crest: On a wreath Or and sable, a fountain argent, garnished and on the top thereof an archangel holding a sword and a balance Or.
Mottoes : (Over the arms) Justicia et Pax; (below the arms) In God is all our hope.

Or on a cheveron sable towe soodring irons in saultor with a cutting knyfe and a shaver argent; in cheife between two sounding leades proper a Jacobs staffe of the seconde; and in poynt a water levell of the same. And for their creast upon a heaulme on a wreath or and sable a fountayne argent garnisshed on the toppe with an archangell holding a sword and a ballance or with this their ancient worde or device Justicia et Pax. Mantled sable dubled argent.

The arms were officially granted on November 24, 1588. The supporters were granted on ?

Ordinances were granted to the mistery of Plumbers of London by the mayor and aldermen in 1365. The purpose of these was to ensure that none but skilled plumbers, free of the City, should engage in the craft, to regulate apprentices, and generally to maintain good workmanship and honest conduct, including the use of accurate weights.

The first known arms were mentioned in 1530 in a manuscript in the College of Arms:
Gules a chevron argent between in chief two cutting-knives and in base two soldering irons in saltire argent. 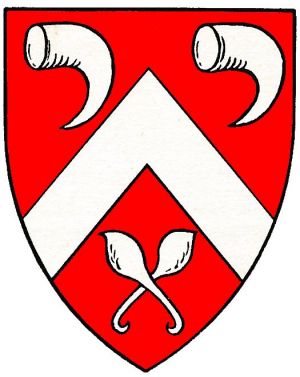 It is not known if these have been officially granted though.

The charges on the chevron in the arms from 1588 are tools of the plumber's trade, but the other charges seem to be merely rather remote puns on the Company's name. The sounding leads, or plummets, refer both to the material used by the craft and to the use of these objects in "plumbing", or sounding, a depth; while the Jacob's staff and the water level are induded as allusions to the process of levelling. The word " level " derives from the Latin libella with its secondary meaning of "plumb line".

The apparatus called a Jacob's staff was a surveying instrument for taking levels, and comprised a graduated rod with a cursor cross-piece. It acquired its name from its resem­blance to the crutched staff of the pilgrim which was similarly called in allusion to the staff of the patriarch Jacob in the Book of Genesis.

The unnamed archangel of the 1588 crest is St. Michael, the Company's patron saint.