From Heraldry of the World
Your site history : Worshipful Company of Security Professionals
Jump to navigation Jump to search 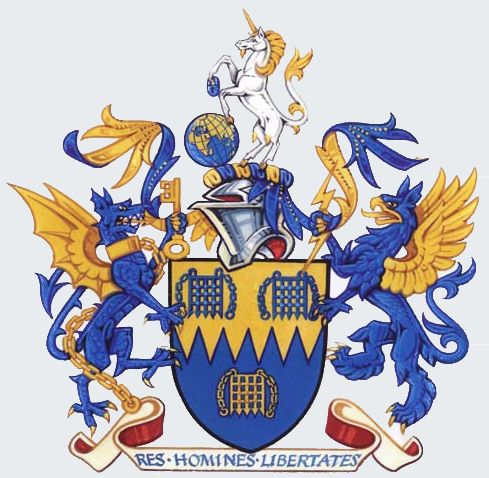 Arms : Party per fess indented acute Or and Azure three Portcullises chained counterchanged.
Crest: Upon a Helm with a Wreath Or and Azure A Unicorn forcene Argent armed maned tufted and unguled Or the dexter forehoof enfiling the hasp of a Padlock Azure the sinister supporting a Terrestrial Globe Or the oceans Azure.
Supporters: On the dexter a Dragon Azure armed langued winged and gorged with a plain Collar attached thereto a Chain reflexed over the back and holding in the sinister foreclaws a Key wards uppermost Or on the sinister a Griffin Azure armed langued beaked winged and holding in the dexter claws a Lightning Flash Or.
Motto: Res Homines Libertates.

If you have any information on these arms Company of Security Professionals mail us !