From Heraldry of the World
Your site history : Worshipful Company of Tax Advisers
Jump to navigation Jump to search 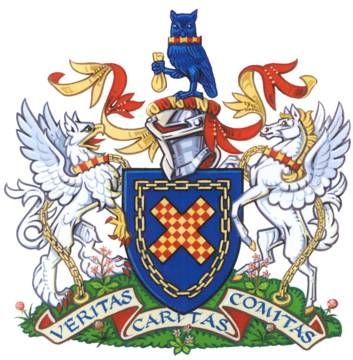 he blue of the shield symbolises the River Thames, the heart of the City of London. The cross represents the Roman X or ten, indicating the tithe or tenth paid in ancient times, chequered to reflect the Court of Exchequer that used counters on a squared tablecloth. The chain symbolises the links of fellowship between the Company’s liverymen. Above the helm, the owl, as in the Arms of the Chartered Institute of Taxation to which many of the liverymen belong, represents wisdom, and extends the purse of charitable provision.

Both supporters are mythical creatures. The Griffin combines the attributes of the king of the beasts and the king of the birds, with the body and ears of the lion and the head, wings and talons of the eagle. Associated with the gods of Minos and Greece, it was an animal of the sun and of justice and was guardian of treasure.

The Pegasus was the winged steed of Apollo, so it is largely connected with intellectual arts. Used by the Knights Templar, it became the symbol of fame, eloquence and contemplation. The plants, thrift and London pride, grow from the bank on which the Supporters stand.

The motto Veritas, Comitas, Caritas (Truth, Charity, Fellowship) reflects the Company’s three basic aims: to represent a profession that stands for truth in its dealings, to distribute charity, and to provide fellowship for all tax advisers.

Literature : Image and info from http://www.taxadvisers.org.uk/