From Heraldry of the World
Your site history : Worshipful Company of Upholders
Jump to navigation Jump to search

London Guild
Established: Ordinances described in 1474 (but probably much older) 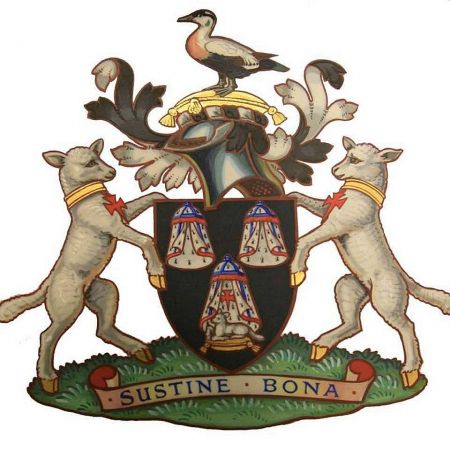 Arms : Sable, three spervers ermine, trimmed azure and gules, in base upon a pillow Or a lamb couchant argent beneath a cross formy fitched gules.
Crest: On a wreath of the colours, A King Eider drake proper standing on a cushion Or.
Supporters: On either side a lamb argent unguled and gorged with a plain collar Or, pendent therefrom a cross formy fitchy gules.
Motto: Sustine bona.

An upholder, or upholster, was originally one who dealt in soft furnish­ ings which involved the use of stuffing to "uphold" them. The ordinances of the Company, which were endorsed by the mayor and aldermen in 1474, specify among the merchandise of the craft such items as feather-beds, pillows, mattresses, cushions, quilts, curtains and " sparvers ", or bed-canopies The upholders appear very early in the City's records, and the grant of arms testifies to the Company's importance in the fifteenth century.

The sperver is a kind of Royal canopy (see also Worshipful Company of Merchant Taylors), th elamb is the Agnus Dei, the Paschal Lamb. The latter suggests a possible origin of the Company as a fraternity dedicated to St. John the Baptist, whose symbol of the lamb and cross. In placing the lamb beneath a sperver the arms not only gave to this religious symbol the dignity of a canopy as is common in representations of holy or royal personages, but contrived at the same time to employ an article in which the up­holder was wont to deal. Evidence that spervers were part of the stock-in-trade of the upholder is provided by the Company's ordinances of 1474.

Until 1963 the company did not use supporters, crest or logo. However, in a manuscript of 1530 a sperver is also mentioned as a crest.

The 1963 augmentations symbolise the upholderer's trade; the crest shows am Eider duck on a cushion for the down used in cushions. The two lamb supporters are a source of fine wool, and, together with the cross, are taken from the shield itself.

The motto, Sustine bona, translates as 'Uphold the good' and thus refers to the trade.