From Heraldry of the World
Your site history : Worshipful Company of Water Conservators
Jump to navigation Jump to search 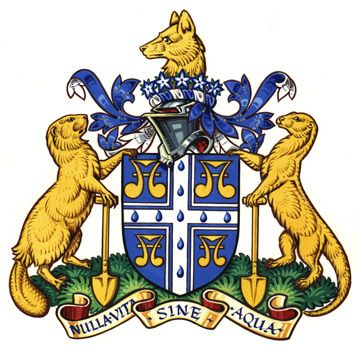 The arms were officially granted in 1993.

The four Bougets as depicted in the centre shield represent the link with the past, as these were one of the original means of carrying water. It so happens that the Bouget is one of the oldest Heraldic Symbols.

The Tear as depicted on the cross relates to the emblem of the Company and the Cross represents the City of London.

The Crest consists of two elements, the first being a Wolf’s head from the Coat of Arms of Sir Hugh Myddelton who was responsible for the first piped water supply to the City via the New River in the l7th Century.

The second element is a circlet of Borage Flowers from Past Master Hugh Berridge’s Crest (Borage is the formal name for a “Water Forget Me Not”).

The supporters consist of two animals, a Beaver and an Otter, each holding a shovel to recognise the part played by the UK Chapter of the American Select Society of Sanitary Sludge Shovellers in the formation of the Guild.

The company motto of Nulla Vita Sine Aqua translates to No Life Without Water.

Literature : Image and info from http://www.waterconservators.org/