From Heraldry of the World
Your site history : Worthing
Jump to navigation Jump to search 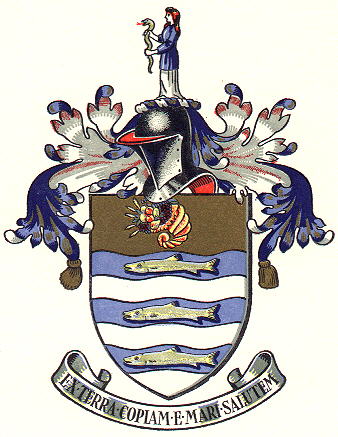 Arms : Barry wavy of six Azure and Argent three Fishes naiant in pale proper on a Chief wavy Or a Cornucopia also proper.
Crest : On a Wreath of the Colours a Female figure proper habited Argent and Azure grasping in both hands a Snake also proper.
Motto: 'EX TERRA COPIAM E MARI SALUTEM' - From the land fulness and from the sea health.

The arms were officially granted on 30th October 1919 and again on 25th November 1974, when the helmet and mantling, but not the crest (which was part of the 1919 grant), were added.

Worthing is a seaside town, and its three main industries, up to the middle of this century, were fishing, seaside tourism, and market gardening. Hence the cornucopia on the chief represents the produce from farming, and the blue and silver bars wavy represent the sea, with fish for the fishing industry. This is reflected in the motto, which translates as 'From the land plenty, from the sea health.'

The figure forming the crest is probably Hygieia, although it is not described as such in the grant.