From Heraldry of the World
Your site history : York University (Law School)
Jump to navigation Jump to search 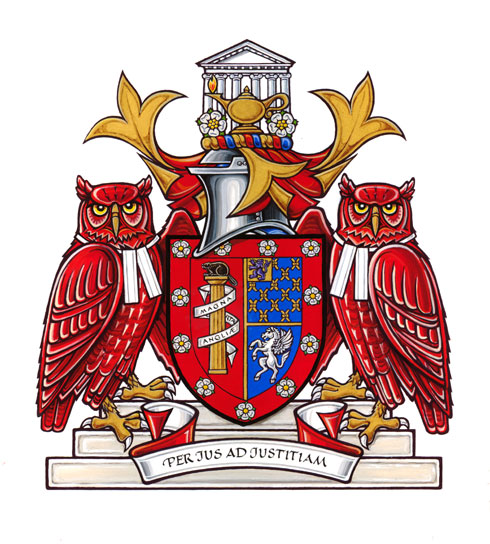 Arms: Per pale, dexter, Gules a Doric column Or ensigned by a beaver couchant proper and entwined about by an escrol Argent inscribed MAGNA CHARTA ANGLIÆ, meaning “The Magna Carta of England”, in letters Sable; sinister, per fess in chief Azure semé of millrinds a canton Or charged with a lion rampant Purpure (the Honourable Society of Lincoln’s Inn), in base Azure a Pegasus forcene Argent (the Honourable Society of the Inner Temple); all within a bordure Gules charged with roses Argent barbed and seeded proper.
Crest: In front of a classical portico Argent an antique lamp Or enflamed proper between two roses Argent barbed and seeded proper.
Supporters: Two owls Gules beaked and legged Or gorged with barrister’s bands Argent and standing on stone steps proper.
Motto: PER JUS AD JUSTITIAM

The design without the border and supporters was granted to Osgoode Hall Law School by the English Kings of Arms in 1958. The column, scroll and beaver appear on the seal, from 1823, of the Law Society of Upper Canada, which created and operated Osgoode Hall Law School until 1968. The beaver is a Canadian symbol, and the column represents Magna Carta as being the central pillar of the English legal tradition. The quarter of the shield with millrinds is the coat of arms of Lincoln’s Inn, one of the Inns of Court in London, England, to which William Osgoode, the first Chief Justice of Upper Canada and the school’s namesake, belonged. The quarter of the shield with the pegasus is the arms of the Inner Temple, the Inn of Court to which John White, Upper Canada’s first Attorney General, belonged. The border indicates Osgoode Hall’s affiliation with York University, the coat of arms of which uses a white rose, the royal badge of the House of York, on a red background.

The portico refers to the original home of the law school at Osgoode Hall on Queen Street in Toronto. The lamp symbolizes learning. The white roses refer to York University.

The owl, a symbol of wisdom through its association with Athena, has been the name of Osgoode Hall sports teams for many decades. The barrister’s bands are part of the formal courtroom attire for Canadian lawyers. Red and white are the colours of York University. The steps refer to the original Osgoode Hall and to the idea of knowledge as a process of stepping up. The three steps also allude to the three-year study of an undergraduate law degree.

The motto, meaning “Through Law to Justice”, reflects the goal of legal education.