From Heraldry of the World
Your site history : Zürich (canton)
Jump to navigation Jump to search 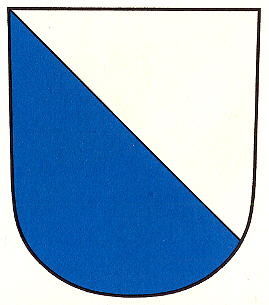 The arms of the Canton Zürich are identical to the arms of the city of Zürich. The arms are probably derived from the banner of the city, which was divided per bend silver and blue. The oldest use of the divided shield as arms of the city or canton dates from 1389, when it appears as a small shield in the seal of the Court of Zürich (see below).

In the next century the silver and blue arms appear all over the Canton. The arms have never really changed since. As the canton was part of the Imperial German State, the arms were often showed as shown below, with two small arms under the Imperial arms and held by two lions as supporters. Even after 1648 when the Swiss cantons were no longer part of the German Empire, the arms still showed the imperial eagle.

The eagle finally disappeared in the 18th century. The arms were now held by two lions, one holding a sword, the other a palm leaf. Sometimes only one lion is shown, holding a palm leaf. The present cantonal arms are officially without supporters, but the Canton uses often a modern version of the arms with the two lions.

The seals of the Canton never showed the arms. The oldest seals showed the three patron Saints of the city, Felix, Regula and Exuperantius. They appear in all later seals, except between 1798-1803. The official great seal of the city (officially still in use, but hardly ever used) dates from 1347 and shows the three saints.