From Heraldry of the World
Your site history : Zoological Society of London
Jump to navigation Jump to search 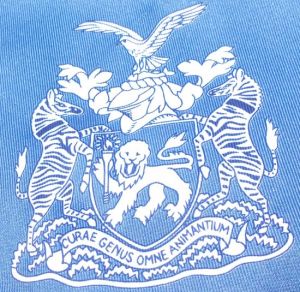 Arms : Gules, a lion passant guardant Or, armed and langued azure, holding in the dexter paw a torch gold, enflamed proper, the flame Irradiated also ·gold.
Crest: On a wreath Or and sable, An osprey, wings extended, perched upon and grasping in talons a fish fessewise proper.
Supporters: On either side a zebra proper, collared Or.
Motto: Curae genus omne animantium.

The arms were officially granted on February 10, 1959.

If you have any information on these arms Society of London mail us !