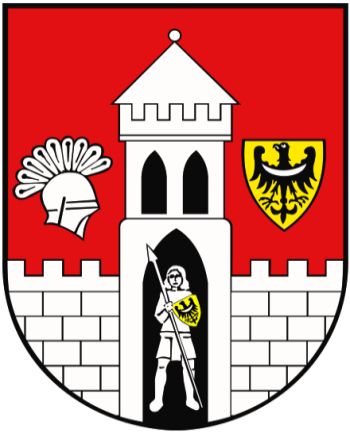 The oldest seal of the city dates from 1302 and shows a gate, with in the gate a knight holding a lance and a small shield with an eagle. Above the gate the arms of Silezia and a helmet are shown. The arms were restored in 1996 and replaced older arms from 1968, which were similar in design, but with slighly different colours.

A later seal, dating from 1428 shows again a gate, with a small shield with the eagle between the towers. The gate is closed and before the door a letter S is shown. During 1945-1968 (?) these arms were again used by the city, see image below.

On March 13, 1602 Emperor Rudolf II granted quartered arms, which were granted with a helmet and as a crest two black wings. These arms show a simplified version of the historical arms in the second and third quarter, whereas the lion is the lion of the Pfalz, taken from the arms of the Emperor himself. These arms were already used on a seal dating from the same year and were used until 1945.