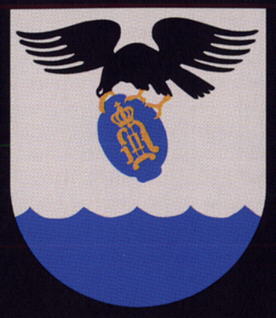 The arms were officially granted in 1894 and again registered in 1974.

The arms are canting, the name means eagle-shield-bay. The small shield shows the monogram of King Oscar II. The arms are based on the canting arms of P.A. Örnsköld, the local governor at the end of the 18th century. The town received city rights in 1893 under the reign of King Oscar II, hence the use of his monogram.