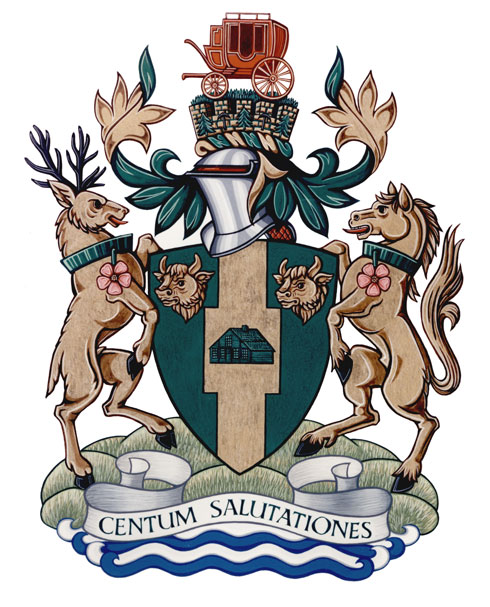 Arms : Vert on a pale nowy billetty between two bull's head in chief Or a representation of the roadhouse at 100 Mile House tempore 1868 Vert.
Crest: On a mound Vert rising within a mural coronet Or masoned Vert charged with a frieze of pine trees Vert alternating with miner's picks Sable, a representation of a Cariboo Road stagecoach tempore 1875 Gules embellished Or.
Supporters: On a mound of rangeland proper rising above barry wavy Argent and Azure dexter a stag Or attired and unguled Sable gorged with a collar Vert pendant therefrom a wild rose blossom proper sinister a stallion Or unguled Sable gorged with a like collar and pendant.
Motto: CENTUM SALUTATIONES

The arms were officially granted on December 15, 1992.

The Red Coach symbolizes, that 100 Mile was one a road house/stop over on the Cariboo Trail. The Red Coach Inn was owned by Lord Martin Cecil, who owned most of the town in the early 20th century. I have no more information on the other symbols.