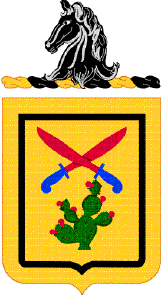 Shield : Or within an orle sable in chief two bolos saltirewise
gules hilted azure and in base a cactus proper
Crest : On a wreath of the colors (or and sable) a horse's head erased sable
Motto : Allons.

The Regiment was organized in 1901 and saw service in the Philippines which is indicated by the crossed Bolos. The Cactus symbolizes service along the Mexican Border in 1916. The Horse's Head symbolizes the Cavalry Roots.