From Heraldry of the World
Your site history : 125th Finance Battalion, US Army
Jump to navigation Jump to search 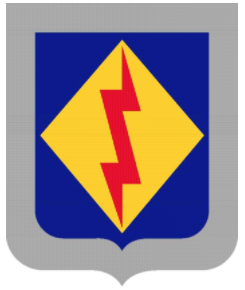 Golden yellow and silver gray are the colours traditionally associated with the Finance Corps. The lozenge is adapted from the Finance Corps Insignia. The Border and blue escutcheon symbolize the Pacific rim and ocean highlighting the unit's aera of operation, The lightning bolt denotes quick response and alludes to the organization's association with the 25th Infantry Division. The Coat of Arms was approved on 3 May 1994.