From Heraldry of the World
Your site history : 12th Infantry Regiment, US Army
Jump to navigation Jump to search 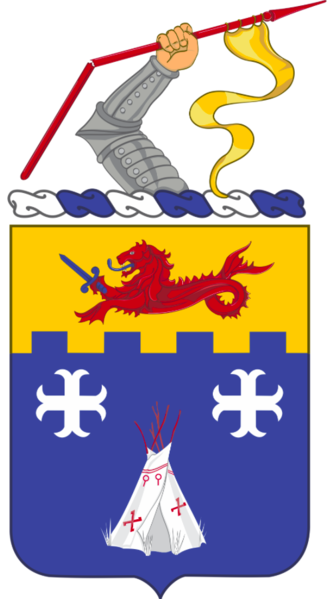 Shield: Azure in fess two crosses moline Agent in base a wigwam of the like garnished Gules with five poles of the last; on a chief embattled Or a sea lion of the third
holding in dexter paw a sword of the field.
Crest: On a wreath of the colors an armoured arm embowed Proper, grasping in the naked hand a broken flag staff Gules, to which attached a pennant Or.
Motto: DUCTI AMORE PATRIAE (Having Been Led By Love of Country)

The field is blue for Infantry. This regiment took part in the Civil War, its great achievement was its first engagement at Gaines' Mills, Virginia, 1862-06-27 and 1862-06-28,
where its loss was almost 50%. This is shown by the moline crosses which represent the iron fastening of a mill stone and the pair recall the crushing losses sustained.
The wigwam with its five poles is for the five Indian Campaigns in which portions of the regiment took part.
The chief is for the Spanish and Philippine Wars, yellow and red being the Spanish colors, red and blue the Katipunan colors; the embattled partition line is for the capture of the blockhouse at El Caney; the sea lion is from the arms of the Philippine Islands. The crest in the Spanish colors is to commemorate the capture of a Spanish flag at El Caney.
The Coat of Arms was approved on 21 December 1922.