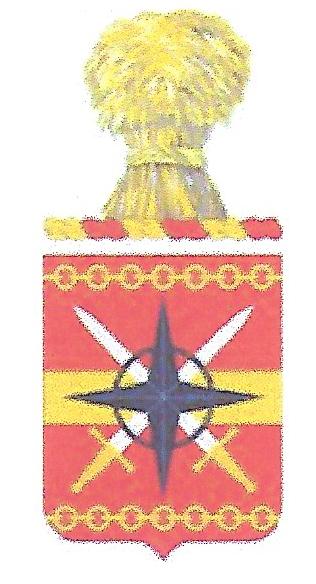 Shield: Gules, a bar Or, overall two swords saltirewise points up, hilts of the like and blades Argent, surmounted by a compass rose with the four cardinal points Azure (Dark Blue),
all between a fess of chain in chief and base of the second.
Crest: That for regiments and separate battalions of the Minnesota Army National Guard From a wreath Or and Gules, a sheaf of wheat Proper.
Motto: Gardiens du nord (Guardians of the North)

Dark blue and scarlet are the colors associated with the Army Adjutant General's Corps. Gold is emblematic of honor and high achievement. The gold bar highlights excellence and military honor, the Swords signify teamworj and the Unit's military mission. The compass rose is for Minnesota being known as the North Star State. The Compass rose also stands for guidance. The chain alluding to Chain mail, symbolizes defence, unity and strenght. The Coat of Arms was approved on 13 February 2007.