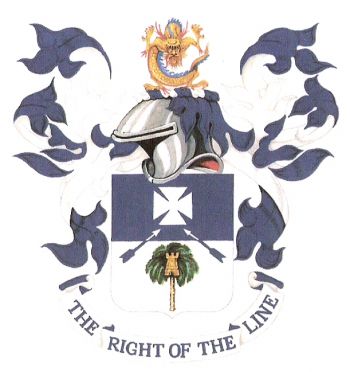 Shield: Per fess Azure and Argent, two arrows chevronwise point to point counterchanged between in chief a cross patée of the last and in base a spreading palm Vert debruised by a castle Or.
Crest: On a wreath of the colors an imperial Chinese dragon affronté Or scaled and finned Azure incensed and armed Gules.
Motto: THE RIGHT OF THE LINE.

The regiment was organized in 1861 and played a notable part in all the Virginia Campaigns from the Siege of Yorktown in 1862 to October 1864.
It was in Sykes' regular division of the 5th Corps of the Army of the Potomac whose badge was a white cross patée. At Gaines Hill and Malvern Hill the division commander
praised the regiment and the brigade commended it at Second Manassas. It performed a most difficult service at Antietam, was in the repulse of the crucial attack of the enemy at Gettysburg and made a most gallant charge at the Wilderness. In later years the regiment took part in two Indian Campaigns indicated by the two arrows and detachments were in two others but not in sufficient strength to entitle the regiment as a whole to participation.It was at the capture of Manila in the Spanish War indicated by the castle, and in the fighting around the same city in 1899 indicated by the palm, and in the China Relief Expedition as shown by the dragon. The motto is the much prized remark made by General Meade directing the station of the regiment in the Review just after the Civil War.
The Coat of Arms was approved on 21 December 1922.