From Heraldry of the World
Your site history : 15th Field Artillery Regiment, US Army
Jump to navigation Jump to search 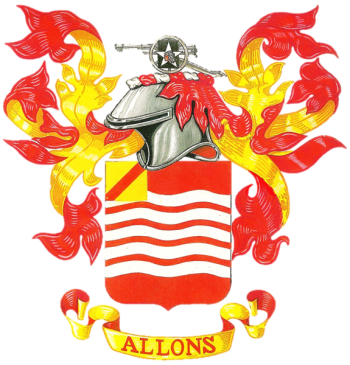 Shield: Gules five closets wavy Argent, on a Canton Or, a bend sinister of the field.
Crest:On a wreath of the colors Argent and Gules, a French 75 mm field gun the wheel charged with the shoulder sleeve insignia of the regiment (a vertical Black oblong with the White star and Indian head of the Second Division) all proper.
Motto:Allons.

The Canton shows the Coat of Arms of the 4th Field Artillery Regiment from which the 15th was formed in 1917. The Waves alludes to the Rivers Aisne, Marne, Meuse and the Rhine which the Regiment crossed during its World War I operations. During the War the Regiment formed part of the Second Division whose Shoulder Sleeve insignia can be seen in the Crest (today the divisional insignia is shield shaped). The French 75 mm Field Gun was used by the Regiment during World War I.