From Heraldry of the World
Your site history : 18th Air Division, US Air Force
Jump to navigation Jump to search 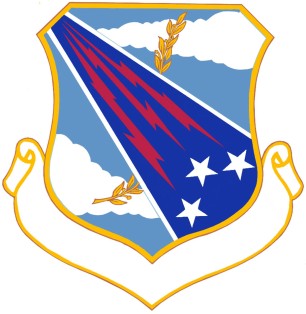 On a sky proper, two cloud formations, one issuant from sinister chief, the other from dexter base fesswise and surmounted by an olive branch originating in dexter base and extending to chief in plae or, over all a bend dinimished to chief sable fimbriated of the second and charged with three lightning flashes radiant from dexter chief bendwise gules, each flash terminating in sinister base near a mullet one and two bendwise of the second all within a diminished border of the third. Approved 14 June 1960.