From Heraldry of the World
Your site history : 1st Cavalry Regiment, US Army
Jump to navigation Jump to search 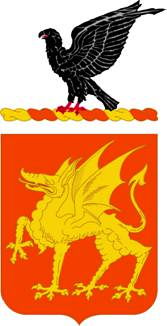 Shield: Tenné (Dragoon Yellow), a dragon passant Or. (And for informal use the escutcheon encircled with a sword belt Sable buckled at base with the belt plate of the Dragoons of 1836 Proper
bearing the regimental motto in base and “FIRST CAVALRY” in chief between two eight-pointed mullets of rays one on dexter side, the other on sinister, all Or).
Crest: On a wreath of the colors, Or and Tenné (Dragoon Yellow), a hawk rising with wings addorsed and elevated Sable, langued and membered Gules.
Motto: ANIMO ET FIDE (Courageous And Faithful).

The color of the Dragoons was Dragoon yellow (orange-yellow), shown by the color of the shield and the dragon is in allusion to the name Dragoon. The gold eight-pointed star on the encircling belt was the insignia of the Dragoons until 1851.
The Crest alludes to the origins as the Regiment of United States Dragoons. This Regiment was formed mainly of Men and Officers from the Battalion of Mounted Rifles.
Which had taken part in the Black Hawk War.