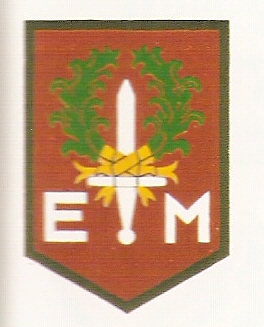 The Division also had the title 1. Division "7th December", the date alluding to the Speech held by the exiled Queen Wilhelmina in London 7 December 1942. The wreath and Sword is from the Arms of the City of Batavia (now Jakarta, Indonesia) and the letters EM for Expeditionaire Macht = Expeditionary Force. This alludes to the Action in Indonesia then known as Dutch East Indies to reestabilsh Dutch Rule following Japanese Surrender. Following Indoensian Independence the Division was disbanded in 1950. It was then recreated 1958-1959 as part of the Dutch Forces comitted to NATO. It become part of the I German-Dutch Army Corps in 1995 and was disbanded in 1 January 2004.