From Heraldry of the World
Your site history : 1st Field Artillery Regiment, US Army
Jump to navigation Jump to search 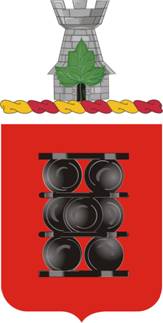 Shield: Gules, a stand of grape Proper.
Crest: On a wreath of the colors Or and Gules, a masonry tower Proper charged with a maple leaf Vert.
Motto: Primus aut Nullus = First or Not at All.

Shield: The shield is scarlet for Artillery. The stand of grape is to commemorate the remark attributed to General Zachary Taylor at the Battle of Buena Vista, “A little more grape, Captain Bragg.” Crest: The tower represents participation of a battery under Major Robert Anderson in the defense of Fort Sumter in 1861. The maple leaf commemorates service in the War of 1812, in Canada.