From Heraldry of the World
Your site history : 1st Filipino Infantry Regiment, US Army
Jump to navigation Jump to search

History: This Regiment consisted of Filipino Americans was raised under the auspicies of the California National Guard at Campo Luis Obispo, California in 1942.
It Served in the Pacific during World War II and was disbanded in 1946 at Camp Stoneman, California. 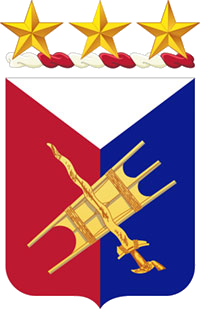 Shield: Per pall Argent, Gules and Azure, over the second and third an Igorot war shield and kris in saltire Or.
Crest:On a wreath of the colors Argent and Gules three mullets Or.
Motto: Laging una = Always first