From Heraldry of the World
Your site history : 20th Infantry Regiment, US Army
Jump to navigation Jump to search 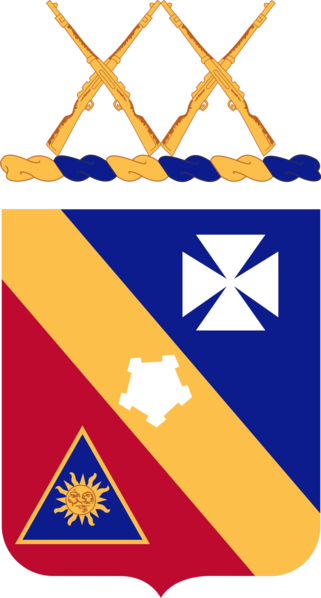 Shield: Per bend Azure and Gules, on a bend Or between in chief a cross patée Argent and in base a triangle of the first fimbriated of the third charged with a sun in splendor of the same, a five-bastioned fort of the fourth fimbriated Sable.
Crest: On a wreath Or and Azure four muskets two and two saltirewise conjoined forming the Roman notation XX Or.
Motto: TANT QUE JE PUIS.

Symbolism Shield The regiment was organized in 1861 as the second battalion of the 11th Infantry and as such saw service in the Civil War. The first engagement was at Yorktown in 1862. The greater part of the Civil War service was in the second Division of the 5th Corps, the badge of which was a white cross patée. Designation changed to the 20th in 1868. The regiment saw service in Cuba in the Spanish War as a portion of the 5th Corps at El Caney and San Juan. The badge of the 5th Corps was a five-bastioned fort. In the Philippine Islands it saw service in the Pasig Campaign of 1899. The Katipunan device is shown in the base. Crest None Motto TANT QUE JE PUIS may be translated To the Limit of Our Ability. The Coat of Arms was approved 19 August 1921.