From Heraldry of the World
Your site history : 24th Finance Battalion, US Army
Jump to navigation Jump to search 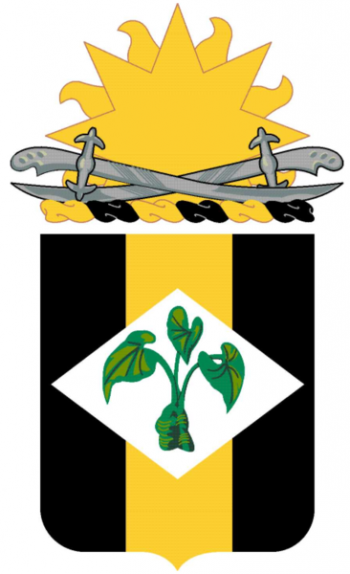 Sable a pale Or, overall on a lozenge with axis fesswise Argent a taro plant Vert.
Crest: From a wreath Or and Sable, a stylized demi-sun in splendor Or superimposed by two scimitars saltirewise point down sable.
Motto: Victory Paymasters.

Golden yellow (Or) stands for excellence, black (Sable) symbolises strenght and resolve. The lozenge symbolises the Finance Corps Branch Insignia. The Taro plant alludes to the associtation with the 24th Infantry Division, whose Shoulder Sleeve Insignia includes a Taro leaf. The Demi-sun stands for victory and the defence of the Freedom in Kuwait and Saudi Arabia and also recalls desert battle conditions. The Scimitars symbolises the Gulf War and represents Kuwait and Saudi Arabia. The Coat of Arms was approved 21 April 1993.