From Heraldry of the World
Your site history : 26th Cavalry Regiment (Philippine Scouts), US Army
Jump to navigation Jump to search 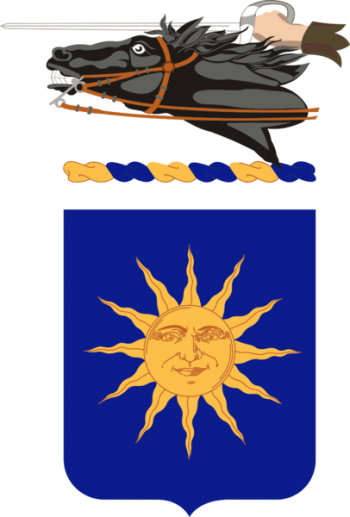 Shield: Azure a sun in splendor with twelve wavy rays Or.
Crest: On a wreath of the colors Or and Azure a Black horse’s head charging erased at the neck bridled and a dexter cubit arm erased habited Olive Drab the hand grasping a sabre at the charge all Proper.
Motto: Our strength is in loyalty.

The Regiment was organized in 1922 from personnel transferred from the 25th Field Artillery which in turn has been formed from personnel of the 4th Philippine Infantry and the 45th Infantry. The shield is blue for the old Infantry Regiments and also for the color of the sea, which surrounds the Islands. The sun is similar to one which appeared on a flag of the Philippine Insurrection. The twelve rays refer to the twelve principal tribes from which the soldiers of the Regiment came, i.e., Ilocanos, Cagayanes, Pangasinans, Zambals, Pampangos, Igorots, Tagalogs, Bicols, Ilongots, Samars, Cebuanos, and Moros. Crest The crest signifies the dashing spirit of the Cavalry service.