From Heraldry of the World
Your site history : 26th Infantry Regiment, US Army
Jump to navigation Jump to search 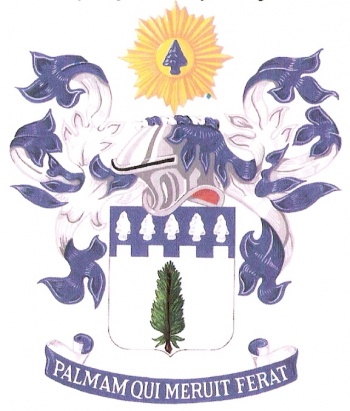 Shield: Argent, a royal plam branch palewise proper, on a chief embattled azure five Mohawk arrowheads of the first (and for informal use , hte shield encircled by a fourragere in the color of the French Croix de Guerre.)
Crest: On a wreath of the colors a sun in splendor charged with a Mohawk arrowhead azure.
Motto: Palmam Qui Meruit Ferat (Let Him Bear The Palm Who Has Won It)

The Colours Blue and White are the new and old Colours of the US Infantry. The Mohawk Arrow was the Regiment's Symbol during World War I. Their Number alludes to the Five major Offensives the Regiment took part in during World War I. The Palm symbolizes the Motto and Victory. The Sun in the Crest symbolizes service during the Philippine Insurrection. Approved 14 February 1989.