From Heraldry of the World
Your site history : 28th Infantry Regiment, US Army
Jump to navigation Jump to search 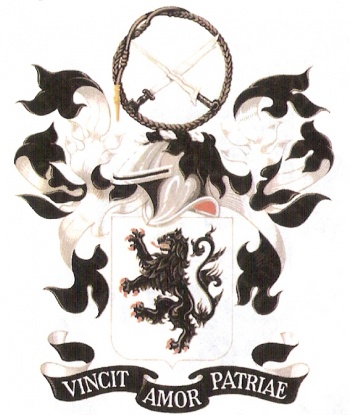 Shield: Argent, a lion rempant sable.
Crest: On a wreath of the colours argent and sable, a kris and kampilan in Saltire argent, hilted sable, encircled by a fourragere in the colors of the French Croix de Guerre.
Motto: Vincit Amor Patriæ (Love of country conquers)

When the Regiment was raised in 1901, the Infantry facings was White, hence the Argent Shield. The Black Lion is from the Arms of Picardy in France and symbolizes the Regiment's service in that Province during World War I. The Kris and Kampilan symbolizes action against the Moros on Mindanao, The Philippines shortly after the Regiment had been organized. Approved 15 March 1983.