From Heraldry of the World
Your site history : 2nd Infantry Regiment, US Army
Jump to navigation Jump to search 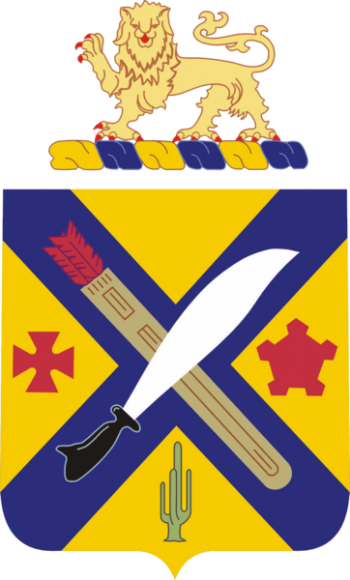 Shield: Or on a saltire Azure between in fess a cross pattée and a five-bastioned fort Gules and in base a giant cactus Vert, two arrows in a quiver Proper crossed with a bolo Argent hilted Sable.
Crest: On a wreath of the colors a lion passant guardant Or.
Motto: NOLI ME TANGERE (Don't Tread on Me).

Service in the Civil War is shown by the blue cross from the Confederate flag and the red cross pattée, the badge of the 18th Division, V Corps, in which the regiment served during the greater part
of that war. Service in the Mexican War is shown by the cactus; in the War with Spain by the five-bastioned fort, the badge of the V Corps in Cuba.
The Indian campaigns of the regiment are shown by the arrows and quiver, and the bolo is for service in the Philippine Insurrection. The lion represents the Canadian campaigns of the War of 1812.
The Coat of Arms was approved on 6 June 1921.