From Heraldry of the World
Your site history : 39th Finance Battalion, US Army
Jump to navigation Jump to search 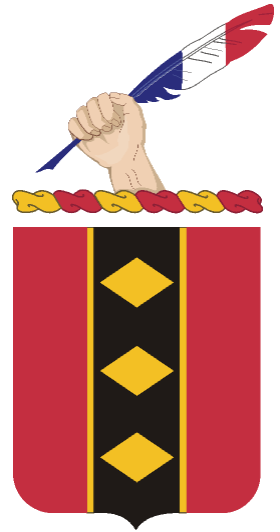 Gules , on a pale Sable fimbriated Or three lozenges with axis horizontal of the like.
Crest From a wreath Or and Gules a hand Proper holding a quill tierced per pale Azure, Argent and Gules.
Motto: Diamond Dedication

The Finance Corps are represented by the Lozenges, which also refers to the Motto Diamond Dedication. The also recall the World War II campaigns that the unit participated in. Red, Black and Gold also indicates service in the Federal Republic of Germany. The hand symbolises integrity and accountability. It holds a quill indicating commitment to responsible administration of the finance mission. The colours of the quill symbolises the USA and refer also to the unit's three European Campaigns of World War II. The Coat of Arms was approved on 26 April 1994.