From Heraldry of the World
Your site history : 7th Infantry Regiment, US Army
Jump to navigation Jump to search 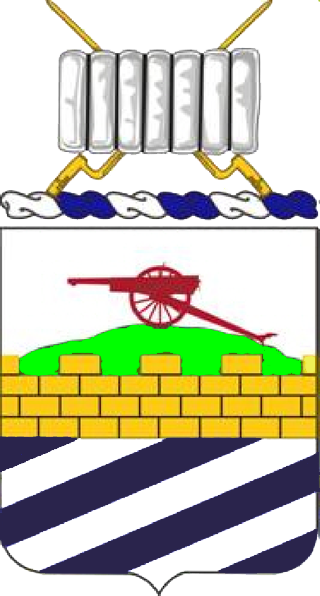 Shield: Per fess Argent and Azure, a fess embattled to chief Or masoned Sable between in chief a field gun Gules on a mount Vert and in base three bendlets sinister of the first.
Crest: On a wreath of the colors Argent and Azure, a cotton bale Argent banded Sable in front of two bayonets in saltire Or.
Motto: VOLENS ET POTENS.

The shield is white and blue, the old and present Infantry colors. The field gun is for the battle of Cerro Gordo, where the 7th participated in the decisive attack by an assault on Telegraph Hill,
a strongly fortified point. This portion of the shield is in the Mexican colors-red, white and green.
The wall is for the battle of Fredericksburg in which the Regiment held for twelve hours a position only eighty yards in front of a stone wall protecting the enemy.
The base alludes to the shoulder sleeve insignia of the 3rd Division with which the 7th Infantry Regiment served during World War I. The cotton bale and bayonets in the crest are taken
from the arms of the 7th Infantry Regiment adopted in 1912. The Coat of Arms was approved on 5 July 1921. It was amended to add a new crest on 15 October 1923.