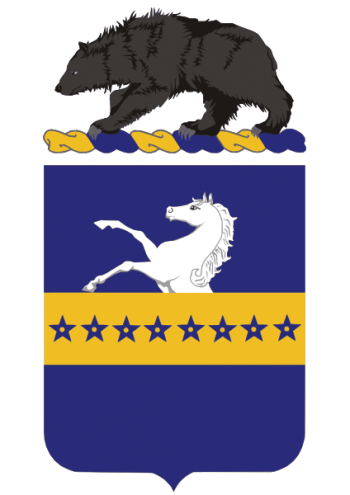 Shield : Azure, on a fess or eight mullets pierced of the field, a demi-horse rampant issuant argent.
Crest : Ona wreath of the colors (or and azure), a grizzly bear passant sable.
Motto : Honor and Courage

Blue and Gold was the unofficial Regimental Colours. The Eight Mullets symbolises the Cavalry traditions, and
the Regimental Number. The Horse is a further symbol for Cavalry. The Grizzly Bear symbolizes California, where the
Regiment was organized in 1866.