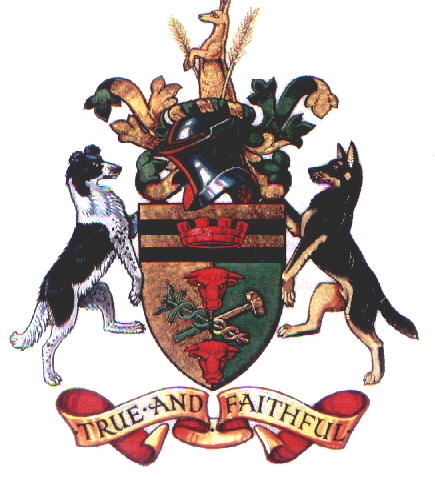 The shield displays a background of gold and green, depicting the close proximity of the Gold Coast with its beaches, and the Shire, with its lush forests and farmlands. The caducaeus, rod of Mercury, God of commerce, and the hammer for industry in general, lie between two heads alluding to the beef and dairy industries. The four bands in the chief symbolize the Shire's Strategic Plan, which when combined with the mural crown of civic authority, speak of the Council's commitment to the future welfare of the Shire.
The colours, black and gold, come from the Saxony arms of Prince Albert, after whom the Shire was named, and refer to industry (black) and resultant wealth (gold).

The kangaroo in the crest identifies the Shire as Australian, while the sugar canes allude to another local industry.

The two dogs commemorate the national origins of two men closely connected with the early history of the district. Captain Patrick Logan was from Berwickshire, Scotland, origin of the Border Collie. (The Herald's original design had an Irish Wolfhound, assuming Pat Logan was Irish). The German Shepherd honours Johann Heussler, from Hamburg in Germany.

The motto also derives from Prince Albert, consort of Queen Victoria, being an English translation of the Saxe-Coburg motto "Treu und Fest".

Literature : Image and background provided by Denis Towner, based on information from Gold Coast City. [[Category:Granted 1977]