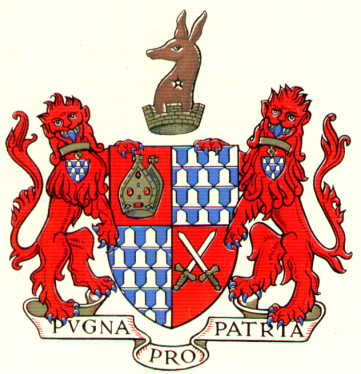 Arms : Quarterly Gules and Vair in the first quarter a Mitre Or and in the fourth two Swords in saltire proper pomelled and hilted of the third.
Crest : Issuant out of a Mural Crown a Hind's Head proper charged on the neck with a Spur Rowel Sable.
Supporters : On either side a Lion guardant Gules gorged with a Collar Or pendent therefrom an Escutcheon Vair.
Motto: 'PUGNA PRO PATRIA' - Fight for your country.

The arms, crest, supporters and motto are based on the arms of the Tichborne family who owned the Manor of Aldershot from 1599 into the 18th century. The mitre has been added to represent the Bishops of Winchester, who originally owned the ancient Hundred of Crondall which included Aldershot. The crossed swords refer to the well-know Military associations of the Borough.

The family Motto of the Tichbornes ('PUGNA PRO PATRIA' - Fight for your country) could not have been more appropriate for an army town.

Before 1923 the borough used more canting arms, which were not officiallay granted 9see below). These showed an alder tree and in the chief 3 piles of cannonballs.

Literature : Image and information from Scott-Giles, 1953 and here