From Heraldry of the World
Your site history : Amt Wenden
Jump to navigation Jump to search 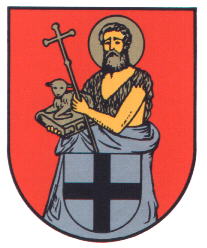 The arms show the patron saint of Wenden, St John Baptist, with his attributes, the lamb and staff. The small shield in front of the saint is the arms of the State of Köln, to which the area belonged for several centuries.