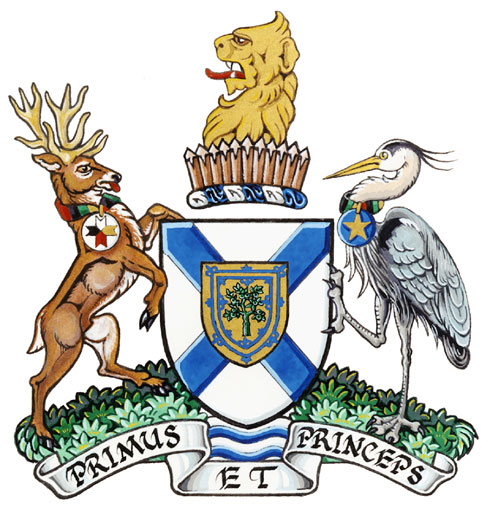 Arms : Argent a saltire Azure, on an escutcheon Or an apple tree Vert within a double tressure flory-counter-flory Azure;
Crest : Issuant from a wooden palisade proper, a lion's head erased Or;
Supporters : Dexter a white-tailed deer proper gorged with a ribbon paly Gules Sable Vert and Or pendent therefrom a plate charged with a Mi'kmaq star Argent, Or, Gules and Sable, sinister a great blue heron proper gorged with a like ribbon pendent therefrom a hurt charged with a mullet Or, the supporters standing on two grassy mounds Vert joined by barry wavy Argent and Azure;
Motto: PRIMUS ET PRINCEPS

The blue and white are the provincial colours of Nova Scotia, and the basic design of this shield echoes the provincial arms. The double tressure on the smaller shield is based on the Royal Arms of Scotland, and can therefore be taken as a reference to the County's namesake, Queen Anne. The apple tree indicates that the Annapolis Valley is famous for producing fruit.

The wooden stakes indicate the fortification of Port Royal, the first European settlement in Canada. By depicting eleven of them, a reference is made to the eleven districts of the County. The lion is indicative of the subsequent British presence in the area, as well as the fact that the County and its major centre (Annapolis Royal) are named after Queen Anne.

The supporters, a white-tailed deer and a great blue heronare prominent local creatures. The Mi'kmaq star honours the first inhabitants of the area, and the gold star is the symbol of Acadia, thus honouring the Acadian settlers of the seventeenth and eighteenth centuries. The collars use the colours of African heritage, and thus mark the contributions African-Canadian inhabitants have made to the area over the centuries, beginning with Mathieu DeCosta. The two grassy mounds represent the geographical features in Annapolis County of the North and South Mountains. The water at the bottom represents the Bay of Fundy and the Annapolis River running through the valley. The water and grassy mounds also represent the County's primary industries of fishing, farming and forestry.

The Latin motto PRIMUS ET PRINCEPS means First and foremost". This was suggested by the County, and it refers to the fact that the County was the site of the first permanent European settlement in Canada, as well as numerous "firsts" in the country.