From Heraldry of the World
Your site history : Archdiocese of Denver
Jump to navigation Jump to search

Established : 1887 as Diocese of Denver
Elevated to Archdiocese in 1941 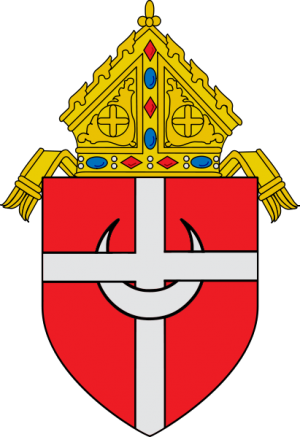 Gules, a Latin cross argent, interlaced at the conjunction a crescent of the second.

The red field honours the Spanish heritage of the area and because the Spanish word for red, one of the dominant Hispanic colors, is "Colorado". The silver Latin refers to a particular natural ice formation outside of Denver on Mount Holy Cross, since the ice formation is in the shape of a cross. Interlaced at the center of the cross is a silver crescent to honer the Blessed Virgin Mary, in her title of the Immaculate Conception, titular of the Cathedral Basilica in Denver.