From Heraldry of the World
Your site history : Ashfield
Jump to navigation Jump to search 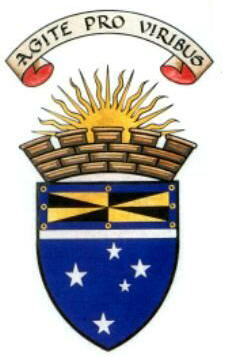 Azure, five mullets (arranged to represent the constellation of the Southern Cross) Argent, a chief gyronny of eight Or and Sable within a bordure Azure charged of eight annulets Or, the chief with a fillet Argent in the lower part. Above the shield is placed a coronet appropriate to a Municipality (VIDELICET: a mural coronet Proper masoned Sable) and for Crest issuant from the said mural coronet a sun rising Or (the said Crest of a sun rising Or, when used alone is to be depicted on upon a Wreath of the Liveries) and in an Escrol over the same this Motto “AGITE PRO VIRIBUS”,

The stars are the Southern Cross constellation. The chief shows part of the arms of John Campbell last Laird of Ashfield in Argyll, Scotland. These were added as the suburb is founded on Ashfield Estate which belonged to Robert Campbell, John's younger son.