From Heraldry of the World
Your site history : Avondale
Jump to navigation Jump to search 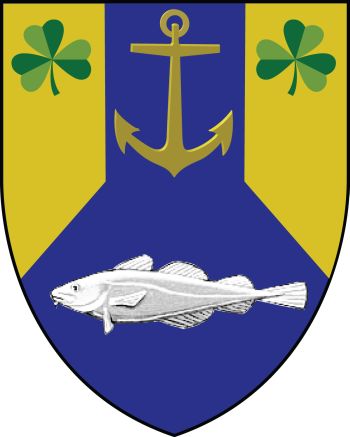 Historically, Avondale was orginally named Salmon Cove South, but it was briefly renamed by the Celtic name 'Avoca' meaning 'where the river meets the bay. The name came from Thomas Moore's Irish Melodies in 1834. Moore, an Irish Poet, referred to a place named Avoca, County Wicklow, Ireland.

In 1906, Avondale received the name it presently holds; Avondale, meaning 'valley of waters'. The blue and gold are the colours of Ireland, the green and gold the colours of St. Patrick, the patron saint of Ireland. The salmon refers to the name Salmon Cove as well as the importance of fishing for the municipality. The anchor also refers to the sea, and is a symbol of hope. The trefoils are a symbol of Ireland.

Literature : image and info send to me by Barry Gabriel