From Heraldry of the World
Your site history : Bücken
Jump to navigation Jump to search 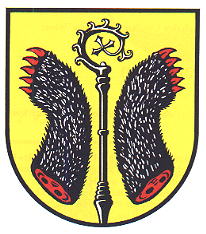 The new arms combine the claws of the previous arms with a crosier. The crosier symbolises the former Bücken Abbey, founded in 882 by the Bishop of Bremen. Since 1413 the Abbott and the Counts of Hoya ruled the village. The crosier in combination with the claws already appeared in the seal of the village from 1413. 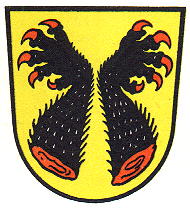 The two bear claws in the arms are derived from the arms of the Counts and County of Hoya, to which the area historically belonged.